Hello everyone! For today’s repairing post I would like to share with you one of our privileged customers that came to IPRO Ampang and did iPhone 6 housing replacement.

Mr. Kamarul Ariffin came to IPRO Ampang one fine evening with a problem with his iPhone 6. He was greeted with full politeness by one of our technicians on duty. After resting his back on the chair right in front of our technician named Arif, he then gave his phone to Arif for inspection.

The condition of the phone was totally wrecked, with a bent on the back housing of the phone that was noticeable at the top-left corner of the phone.

On top of that, the screen’s phone was also in a bad condition where it did not show any displays. Before Mr. Kamarul’s explained about what happened to the poor condition of his phone, from the first look of the appearance of it, in an instant you can tell that the back housing of Mr. Kamarul’s iPhone needed a replacement, without a doubt.

This is because the LCD could not even fit into the back shell of the iPhone that is slightly bent. 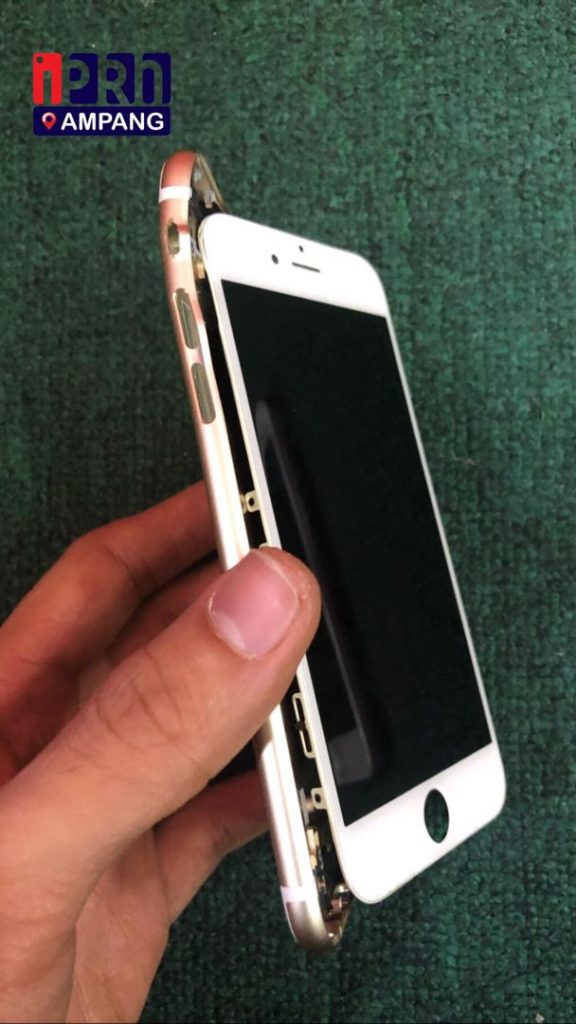 Condition of the back shell of Mr. Kamarul’s iPhone & LCD shows no display

Mr. Kamarul then started telling Arif about how the phone was in such bad shape. He told that he dropped his iPhone from the third floor of his apartment, as unlucky as it already were, the phone dropped twice!

He then continued telling the first time the phone dropped it was still showing display, but after the next one, the LCD popped out from the back shell of the iPhone thus the bent is formed and the screen went totally black.

Arif disassembled Mr. Kamarul’s iPhone to further checked other parts that were affected. Upon checking, Arif noticed that the flex cables of the front camera is tore impacted from the fall. As soon as Arif realized the faulty parts, he then immediately informed Mr. Kamarul. Aware of the faulty parts, he then asked Arif for the total cost that he needed to pay off the whole replacement.

Mr. Kamarul was given a few selections of colors of the body shell that are blue, red, silver, rose gold, or the same as his current color which is gold. After an agreement has been made from both individuals, Arif then proceeded with the repair. The whole replacement took about 4 hours as the entire parts of the iPhone should be transferred to the new housing.

Arif suggested for Mr. Kamarul to leave his phone here and called him when the replacement is done, but he hesitated and decided to wait at IPRO Ampang until the whole process is finished. After the whole replacement took place, Arif tested the functionality of every part of the phone to make sure everything worked perfectly. Arif also gave the LCD his final touch by placing a tempered glass for Mr. Kamarul.

After handed the iPhone back to Mr. Kamarul, he then gave a quick look at it before made his way to the cashier. He then thanked Arif for the replacement before he walked out from IPRO Ampang.

Thank you for choosing us as your phone repairing center!